Let me tell you a story of a house that we did not buy.

We got a call from a home seller in the middle of the winter time. We had just gone through a week end of below zero and an ice storm. It was so cold, that we didn’t even want to go look at it.

It was just down the street from our office . . . a cute little tudor house with a family room addition. The numbers he wanted sounded like it would be a house that we would really want to buy, if it was in as good a condition as he said it was.

He had taken a new job out of state and moved out and just needed it sold so he could buy a new house where he had moved.

We walked in the back door and everything was COLD and smelled damp, our first clue of problems. We were entering through the family room addition and it was your typical 1950 add on with vinyl flooring and paneling walls.

We entered the Dining room and noted that the hard wood floors and doors were dark wood and in very good shape, but they seemed a bit frosty, like water had condensed and then frozen. The Kitchen was a typical 1930s Kitchen that needed renovated, but we kept coming back to the frosty look to all the surfaces.

Then we went into the bathroom. Now I have seen this a few times before, but not quite as spectacular. The toilet had frozen and it must have frozen so quickly or it was leaking water into the tank after it was frozen because the toilet had exploded from the pressure of the ice.

Then we went to the basement and down there we found crunchy frozen carpet and evidence of a lot of water that had been running and freezing.

The homeowner it seems had decided to shut off the gas to save money, but had failed to shut off the water and winterize the plumbing. And after 2 weeks of below zero, he had massive frozen and broken plumbing. But other than broken pipes and sparkly surfaces, we could not tell the extent of the damage.

So we called him to tell him the bad news, that he had massive water damage and while we would still make an offer, it we would need to see it after it thawed out to see how bad it really was. We looked at it again about a week later, the hardwood floors had buckled pretty much through out the house, the walls and finish in the basement were all destroyed and on the floor and the people he had in the house were ripping it all out.

We suggested to him to check in with his insurance to see what they would cover and then get back with us. But he never really did get back with us. Not sure if he was able to get the insurance company to come in and fix things or if he just let it set and go to foreclosure. As he had not lived in the house for more than 60 days, I am going to take a guess that his insurance did not cover the damage as the average home owner policy does not usually cover anything after 30 to 60 days of vacancy.

So to all of you potential home sellers out there in the Kansas City Market.

Please take the time to shut off your water and winterize your house if it is going to be vacant after about November 1st until about mid April. Also check with your insurance agent to make sure your are going to still be insured, even if the house is sitting vacant. 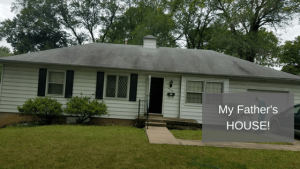 IF YOU NEED TO SELL, NO MATTER THE SITUATION, PLEASE, DON’T HESITATE TO CALL