Stephanie reached out in the fall of 2017 on her parent’s home.  She and her 4 siblings wanted to a house and in the next few months had us look at the home and make an offer.  But she and the siblings were not ready to sell for a few months.

Some of them moved in and lived there for a while and periodically touched base with Scott at kcmoHomeBuyer.

Over the next few months, they worked on cleaning out the house, accepted our purchase offer, and still they could not quite get everything cleaned up.  Finally, in August they got the last of the items they wanted out of the home, we all went to closing and they were able to pay the back taxes, pay off the small mortgage, and to split the final proceeds.

Now they can move back to Florida, Colorado, and their own lives and stop dealing with their parent’s home.

Stop The Search...Start The Process Here!

We pay all CASH and you'll not pay any commissions, or make any repairs. Because we're LOCAL, we can work fast. Put your address and email below and answer a few easy questions on the next page to get your FAIR offer. 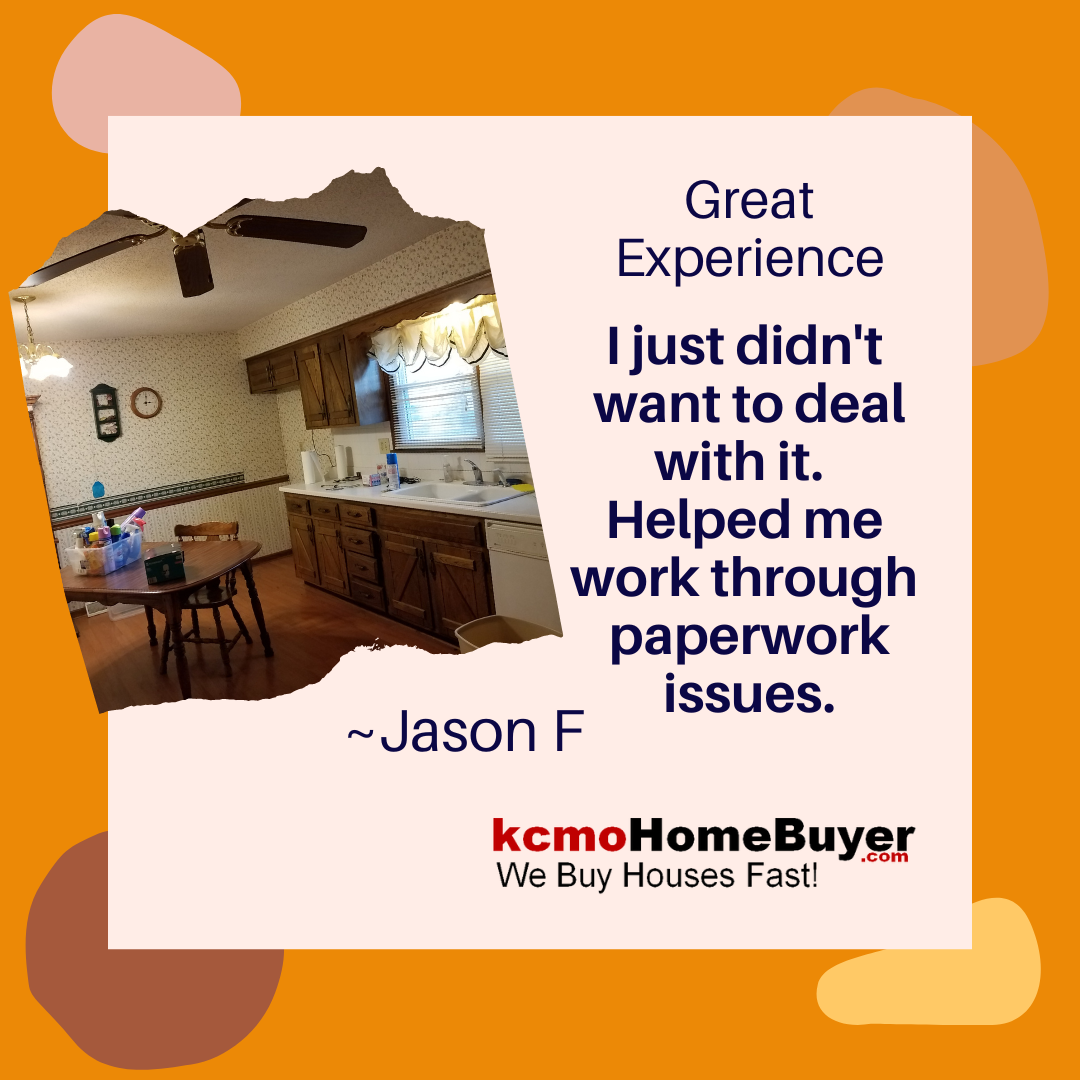 From the very beginning, I could tell he (Donald Tucker) was honest. He empathized with what we were going through and how hard it was to let our family home go. He stayed on top of things as they occurred and it felt like doing business with a trusted friend. He was very reassuring and explained every step of the process. Thank you so much.

NOT PENALIZED FOR NOT GETTING EVERYTHING CLEANED OUT OF THE HOUSE

I liked the fact that I wasn’t penalized or felt pressure for not getting everything cleaned out of the house. There was over 40 years and three families’ worth of treasure stored in the house, making me feel that the challenge of cleaning it was going to be impossible. I did what I could and you never hesitated in telling me that it’s ok to leave the rest behind.

HELPED ME THROUGH THE PROCESS

Words cannot express how Kim’s hard work has affected my family. After a death in my family, I was left with a home out of state that had been abandoned and no banks would even claim the loan! Kim helped me figure out how to determine ownership, what to do about the taxes, and how to clear up the loan status so the property could be sold. She helped me through the process every step of the way, despite my frazzled mindset after losing a loved one. There is no one better, she’s simply the best!

My experience with this company was just totally amazing. I am very thankful for contacting this company.

If you want to sell your home, please contact Scott Tucker at kcmoHomeBuyer.com.  My experience with this company was just totally amazing.  Hassle-free no agent fees, costly inspection repairs, no open house days, no never-ending potential buyers who want to deduct this and that from the asking price.  Scott Tucker gave me a very fair price for my home.  Also, after I agreed to a closing date, I needed an extension date and they agreed to my time frame.  Scott Tucker was awesome to work with from start to closing, with no hidden fees.  I am very thankful for contacting this company.  Thanks again from Nadine T.