Don had a great house that he and his family loved in Independence. But because of work, they were moving out of the area and needed to sell their home.

Moving out of state was a hard process.

First, they found a new place to live and his wife and kids moved, leaving him behind so he could get the house sold.

But before he could sell, there were a lot of little projects that he needed to get done so it was “ready” to be listed with a Realtor. Nothing major, but all little eyesores that needed attention. All things that were going to take him a month or two to get finished, meanwhile his wife and kids were in another state and he was missing out on being with them.

He reached out to Scott Tucker here at kcmoHomeBuyer to see how we might be able to help. He wanted to see what we could pay for the house without having to make any repairs or pay any commissions and that he didn’t have to worry about blowing up at the last minute, forcing him to stay for a few more weeks or months.

We took a look and made him an all-cash offer that was “as-is” meaning he didn’t have to fix anything, just take his clothes and any of the remaining belongings he wanted and go. We were able to close on the exact day he wanted to close and hope in his car and head off to his wife and kids and a new job in Texas.

If you are moving out of state for any reason and don’t want to waste time back here in KC working on honey do projects and waiting for a house to sell, if you want to jump in the car or on the plane or even in your RV and go, give Kim or Scott a call at (816) 408-3600 to see what they might offer. 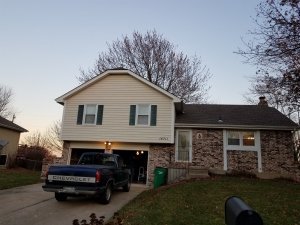 NOT PENALIZED FOR NOT GETTING EVERYTHING CLEANED OUT OF THE HOUSE

I liked the fact that I wasn’t penalized or felt pressure for not getting everything cleaned out of the house. There was over 40 years and three families’ worth of treasure stored in the house, making me feel that the challenge of cleaning it was going to be impossible. I did what I could and you never hesitated in telling me that it’s ok to leave the rest behind.